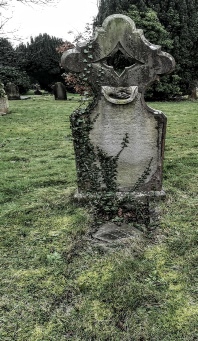 The inscription on this stone has fallen off and lies below.  To identify it, it was cross checked with the grave to the right of it. (Kenward - AL A09)

There was some difficulty identifying the right John & Rachel Adams.

By the 1867 directory this has changed to 39 St Andrew's Road; publican John Pain [sic] Adams.

John Abraham Maplesden, of Sedlescomb, applied that the license of Mr. Adams, of the Cottage Inn, be transferred to him.—Granted hslo 14/4/1875

The sign of the public-house in St. Andrew's road heretofore called the Cottage Inn, is changed to the Falmerston," Mr. Maplesden, late of Sedlescomb, having become the landlord.  28/8/1875

Hastings and St Leonards Observer - Saturday 25 September 1880
TO GREENGROCERS, FRUITERERS, DAIRYMEN, AND PORK BUTCHERS.
Mr. CARLETON J. LEWNS Is favoured with instructions to DISPOSE of by PRIVATE TREATY, the EASE and GOODWILL, together with the FIXTURES and FITTINGS of the old established business, in the above line, successfully carried on for many years by the late Mr. John Paine Adams, Nos. 40 and 41, ST. ANDREW'S ROAD, HASTINGS.  The premises are held for an unexpired term of 10 years, at the exceedingly low rental £60. There is a large and extensive connection already existing, but might, by diligent canvassing, be easily doubled, and to business men an excellent opportunity offers for a safe and lucrative investment.  Full particulars to price, average returns, Ac., together with order to view, may be had on application to Mr. C. J. Lewns, Auctioneer and Business Transfer Agent, 41, Havelock-road, Hastings.

The area of greatest change in the Queens Road street scene is the area around the site of St. Andrews Church and the former Gas Showrooms.  This whole area had been St Andrews Road and before that St.Andrews Terrace until, in 1883, following the visit of the Prince and Princess of Wales the previous year, it was renamed Queens Road and the properties were re-numbered; for example, No 36 St Andrews Terrace dating from around 1836, became 48 St Andrews Road before ending up as No 84 Queens Road.

What was the Cottage Inn, later the Palmerston, is now 75 Queens Road.