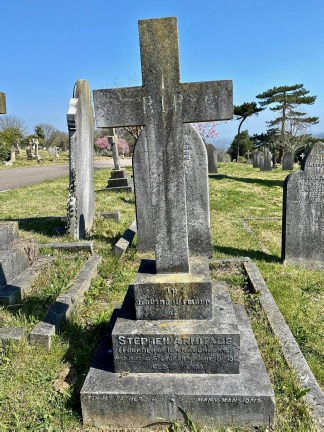 "In My Father's house are many mansions"

Also in this grave is buried his nephew, Captain James Allan Ross Armitage, who died in 1919 and is also remembered on the Screen Wall.

Westminster Gazette - Saturday 10 August 1912
Mr. Stephen Armitage, of Marina. St. Leonards-on-Sea, Sussex, who died on June 18 last, left estate of the gross value of £47,660, of which £47,567 6s. 9d. is net personalty.  By his will the testator left two pictures by Edward Armitage. R.A.,[his uncle] to Newcastle Picture Gallery, they being now on loan there, and £5,000 to the trustees of a deed dated March 22, 1912, for the benefit of the Spanish Reformed Church. [A niece later donated other of Edward's works to HMAG and his 'A Dream of Fair Women' - a design for a frieze in two section,s hang in the Brassey Library.]

When he died in June, 1912, Stephen Armitage  was unmarried and without any children. Concerned that his company, Icilma [see below] continue to have the services of L. H. H. Swann after his death, Armitage stipulated in his will that 74 Icilma Company shares were to be kept in trust to pay dividends to L. H. H. Swann for the next six years after which, if he still remained with the company, the shares were his absolutely. Of the remaining Icilma shares, two-eighths went to Stephen Armitage’s brother James, two-eighths to his brother Edward, one-eighth to his friend Thomas Andrew Barber, one-eighth to each his sisters-in-law, Margaret Williamson Berridge and Amy Armitage and one-eighth to Edward Howarth Armitage. Some of these beneficiaries continued to play an active role in the company. In 1914, the directors of Icilma were listed as James Auriol Armitage [1857-1923] (Chairman), Edward Howarth Armitage [1859-1929], Caesar Mendel, and L. H. H. Swann (Managing Director).

In 1895, Stephen Armitage, born in 1855, an English civil engineer from Barlow, Derbyshire, was made the new director of the Société Générale des Pétroles Franco-Algériens, Ltd., a company formed in 1893 to acquire oil rights, concessions and/or franchises in Algeria.  When drilling for oil at Hammam Selama, 5 km south of Port-aux-Poules, Armitage discovered an artesian source of hot mineral water.

By 1900 the salon had closed and Stephen Armitage had moved to England; he would later claim "France was not ready for Icilma."  Armitage moved his operation to 142 Gray's Inn Road, London, and named the business 'Nature's Remedy Company.'  The trademarks of Amel and Selama were also established around this time.  The total staff of this establishment did not exceed a dozen and Armitage was works manager and chemist.  He also designed the machinery that created the Icilma cream.  In 1922 Lever Brothers [now Unilever] bought the company but the products were available until withdrawn in 1967.

See the illustrated booklet at http://www.cosmeticsandskin.com/booklets/icilma-toilet.php 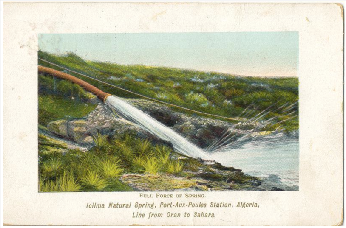 Initially he planned to build a health spa resort near the spring, but this idea was abandoned due to the marshy terrain and presence of mosquitoes. Two small hotels were built at the side of the lake, however, and a thermal establishment (with plunges, sprays, baths, and douches) was created.  He decided to sell bottled water from the bore along with a range of products made with it.  Algeria was a French colony and this may have been why Armitage elected to situate his factory at Asnières-sur-Seine, Paris.  In 1899, he also opened a retail outlet, the Maison Icilma, at 5 Avenue de l’Opéra, Paris.