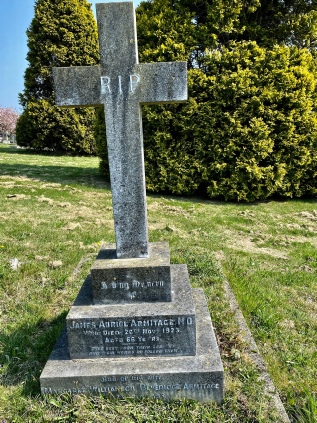 “They rest from their labour
And their works do follow them”

And of his wife

KC J03 - grave of Stephen Armitage: in this grave,  is buried James’ son, Captain James Allan Ross Armitage, who died in 1919 and is also remembered on the Screen Wall.

Hastings and St Leonards Observer - Saturday 01 December 1923
Great Missioner’s Death
DR. J. A. ARMITAGE'S WORK FOR THE S.P.G. - JOURNEYS TO ALL PARTS OF THE WORLD.
The Society for the Propagation of the Gospel has lost one of its staunchest workers and most generous supporters by the death of Dr. James Auriol Armitage, of Netherwood, St. Helen's Park, Hastings, at the age of 66, and townspeople generally will regret the passing of one whom they greatly respected. Dr. Armitage died on Monday, after an illness which had caused his health to fail rapidly during the past few months.

A native of Casterton, Westmorland, Dr. Armitage was educated, amongst other places, at Clifton and Rugby.  He matriculated at Cambridge, and in 1801 took his M.A. degree, having already passed the B.A. degree with honours ten years earlier.  He became M.D. (Edinburgh), and was a Fellow of the Obstetric Society, and Member of the Royal Medical Society (of which at one time he was president), both institutions being at Edinburgh.

He devoted practically the whole of his time to medical missionary work, and spared no effort in supporting the world-wide activities the S.P.G., of which he became a vice-president.  In 1914 he went America on the Society's behalf and in 1917 visited China as trustee of the China Medical Board of the Rockefeller Foundation.  Two years later he went to New York and in the following year went to China with Mr. Rockefeller for the opening the Pekin Union Medical College and Hospital.  He was also Treasurer of the North China and Shantung Missionary Society.  Dr. Armitage pushed the work of the Society with all his energies and has spoken in its support in all parts of the country.  On many occasions he has spoken in local churches, including Christ Church, Blacklands, upon the work of the S.P.G.

Dr. Armitage was for some years chairman of the lcilina Company, proprietors of the famous products bearing that name.  His brother. Stephen, was the discoverer of the spring in Iceland [sic] from which the products are made.  Locally Dr. Armitage was a well-known golfer, and last year was captain of the Hastings Golf Club.  He was also vice-president of the Hastings Boy Scouts.  About two years ago he was appointed Justice of the Peace for the borough and usually took his place on the Bench on Saturday mornings.

Dr. Armitage was greatly affected by the loss of all his three sons in the war, two of whom rose to the rank of captain and one held the rank of lieutenant.  One son, Dr. Frank Armitage, was awarded the D.S.O. in 1917.  The widow and three daughters are left to mourn their loss.

DOUGLAS  WILLIAM  ARMITAGE  was born  at Wolverhampton  on February 8,  1893, and was the  fourth  son of  Dr. J.  A.  Armitage of Hastings and Wolverhampton.  He entered Oundle in September 1906, following his brother F.  R. at Laxton House.   Prominent alike in work and games he became head of the school and was also captain of football.   ……   From Oundle he went on to Pembroke, Cambridge, where he was awarded an Exhibition for Classics.  After war broke out he joined the Royal Sussex Regiment and was reported missing in October 1915.   His death was presumed to have occurred on that date.'

Hastings and St Leonards Observer - Saturday 23 October 1915
A MISSING OFFICER
Much sympathy is felt with Dr. and Mrs. Auriol Armitage, of St. Helen's, in their apprehensions as to the fate their son, Lieut. Armitage.   The young officer has been missing since the end of September……..