Edward Thomas Booth, son of above – Founder of Booth Museum of Natural History 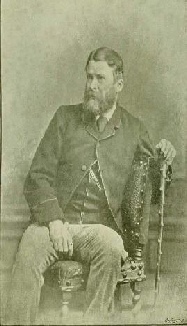 From his obituary:   “Mr. Booth was bom at Chalfont St. Giles, in Buckinghamshire, on June 2nd, 1839, the only child of his father, Mr. Edward Booth, of Marina, St. Leonards, by Miss Beaumont, of a well-known Northumberland family.”

By 1850 the family had moved to Hastings, Sussex, where the young Booth was taught taxidermy by Kent, “Mr. Booth learnt bird-stuffing when a boy, from Kent, the well-known bird-stuffer of Hastings” and barber from St Leonards.  From an early age he spent the greater part of his time in the field, studying our native birds in their haunts in every part of the United Kingdom, and collecting and preserving the specimens that fell to his gun   These specimens were mounted in an artistic way, each species  in a separate case, with objects and painted backgrounds so  arranged as to represent the birds in situations similar to those in which they were actually obtained, the arrangements being in many instances copied from sketches taken on the actual spots where the birds themselves were shot.  [These are recognized as the first diorama presentations in the world, much copied by a wide range of museums]

The Museum biography gives his birth date as 1840 and states “In 1854 the family moved to Vernon Place, Brighton, where he attended a private school.  He went on to Harrow and finally to Trinity College Cambridge from where he was sent down.”

So it is interesting to note: