In correspondence on G H Borrow's Lavengro, Whistler makes a comment referring to "his brother William, who became a painter".

The reference is cited as Borrow, W H - so Whistler was confused (George only had one brother, John)

Another oblique Hastings link to George - SULLIVAN, Edmund Joseph, 1869-1933 Artist, former student of Hastings School of Art. son of Michael Sullivan, attended Grammar School, studied under his father at School of Art, ................. .being commissioned by Macmillan to illustrate George Borrow’s Lavengro, soon after his marriage to Frances Louise Williams (1894), he ‘went down to Hastings to make studies of gipsies and their surroundings’; book published 1896, contained 45 small line drawings, ‘the first important book he illustrated’

A John Borrow was best man at Jethro's (Lydia’s Father) wedding - but which one?

Lydia, of 117 High Street, is recorded as speaking of George as a cousin, but as far as can be definitively traced, they shared a Great Great-grandfather, or even a Great x 3!

"Family documents and reminiscences have been contributed by Mr. W. H. Borrow" from
George Borrow - The Man and His Work  by  R. A. J. Walling 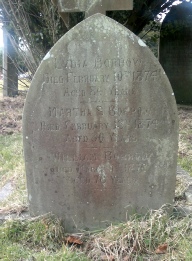 There is a death recorded in Hastings in 1847 for Jethro Borrow – presumably her father.

The next record is the death of Ada, William Henry’s sister, who was born in Middlesex in 1845 and died in 1858.