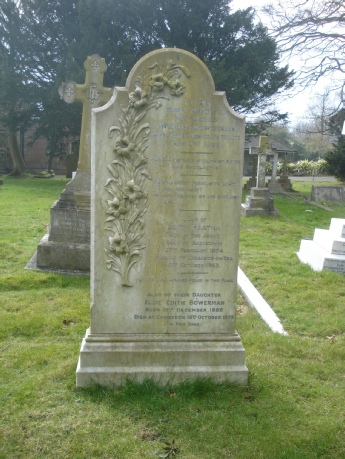 Who passed from death to life

“Through the gate of death we enter

“Peace, perfect peace, with loved ones far away?

In Jesus' keeping we are safe,

I will give you assured peace in this place

Also of their daughter

Edith Martha was born on the 27th February 1864 in Baddingham, Suffolk, the daughter of Chase Barber (a draper) and his wife Eliza. The family later moved to Sinnock Cottage in Hastings Old Town.
Edith worked as a draper's assistant for William Bowerman.

Edith and William were married and on the 18th December 1889 their daughter Elsie was born.

William sold the shops and from 1890 lived in comfortable retirement at 145 London Road.

When William died on the 3rd May 1895, aged 70 he left his wife and daughter several rental properties in Hastings, which provided an income for them.  A plaque in memory of William Bowerman was erected by Edith at St Matthews Church, St Leonards.

In about 1907 Edith married Alfred Benjamin Chibnall, a farmer.  Edith and Alfred in the village of Thakeham in West Sussex.  But the marriage seems to have failed and by 1912 Edith was living with her daughter Elsie at 145 London Road, St Leonards.