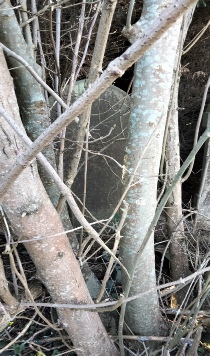 In 2012/13 this grave was seen and recorded.  More recently we  looked for it to take a photo, because we wanted to record the story.

We failed to spot it, despite searching in the vicinity of the tree where we suspected it might be.  Recently some of the tree died back and with some discomfort the stone could be viewed. The stone faces the tree trunk, and was very difficult to photograph, but is in excellent condition.

My hope is in Thee

Who was drowned off Great Yarmouth

Blessed with a kind heart'.

Erected by his sorrowing widow

Ellen, wife of above

The Bee was one of the longest-lived luggers.  Built in Hasting in 1845 she was about 50 feet long overall; she ceased fishing in 1882 and was then sold to Rye owners who converted her ino a one-masted smack.  She was later converted into a ketch and sold to Newhaven in 1914. Her final owners were East Sussex County Council, who sold her for breaking up un 1922. [Peak, Steve: Fishermen of Hastings]

In February the observer has am article headlined "Destruction of Nets."  The Bee, a local fishing boat belonging to Mr. Bumstead, received serious damage to her nets while fishing about 40 miles off Yarmouth.  It appears that a fishing craft hailing from Ostend ran across the nets, the result being a total loss of 66 nets, besides barrels and other tackle.  the loss sustained amounted to £47 and half of this was paid by the Fishermen Club. The Observer doesn't seem to record if, as hoped, the guilty party was called upon to bear the amount of the damage. (HSLO -26 February 1881)

Hastings and St Leonards Observer - Saturday 22 October 1881
HE RECENT GALE. HASTINGS FISHERMAN DROWNED.
Fresh communications relating to the havoc wrought the eastern part of the coast by last Friday's gale are continuously coming to hand.  On Tuesday it was stated among the fishing fraternity that no less than 10,000 nets, barrels, and ropes were lost from the boats engaged in fishing on the coast of Great Yarmouth, Lowestoft, and neighbouring ports, the losses being a very serious character.

Three luggers from Hastings were engaged in the herring fishery, on the coast aforementioned, two of which have lost a member of their crew, besides enormous amount of gear.  The lugger, Albatross, the property of Messrs. Gallop, of this town, but manned by an eastern crew, lost one man, a small boat, and fifty nets, barrels, etc.  The Swan, also belonging to Messrs. Gallop, has lost a very large quantity of the necessaries of a fishing boat, whilst from the "Bee" which was owned by Messrs. Coppard and Bumstead, about " half a fleet " of nets, etc, have been lost, and, sad to record, the captain, Mr. John Bumstead, was washed from her and drowned.

When the news of this distressing occurrence reacha cRELEed Hastings, the flags on the fishing boats were hoisted half-mast high, in respect to the memory of their departed comrade.  The deceased, who lived at Smith's Row, All Saint's street, was thirty years of age, was married, and leaves a widow and four children very scantily provided for.  Deceased was quiet, sober man, and much respected. A circumstance which has elicited much sympathy for the widow in her trial.

The total subscriptions to the Bumstead fund which was set up amounted to about £144.   the wisest arrangement possibly that could be come to, under the circumstances.   The Committee agreed to pay fourteen shillings a week to the widow.

Ellen later married Edward Francis Hulbert, a labourer, by whom she had at least two children.  As John Henry was living with them in 1891 at 222 Harold Road, under the name Hulbert it is reasonable to assume the other three children also formed part of the family.  (Edward has been previously married.) This led The Observer to make a careless error in reporting the death of John Henry junior.  See next page.