At the City Police Court to-day, before the police magistrate, Mr. Cogdon, two boys, about 17 years of age, named Stephen Fennel and James Wilson, were charged with setting fire to the engine-house of the Wainwright Tribute Company, on the 16th of November last.  Mr. Rainy defended the prisoners.

Mr. A. G. Corbett, deposed that the property known as the Wainwright Tribute plant belonged to him, and was totally destroyed by fire on the 16th November last.
The Argus, 10 December 1875

THE AMMONIA WORKS.
The nuisance purporting to arise from these works was made the subject of trial at the Collingwood Court of Petty Sessions, and heard before Messrs. Eade, Nettleton, Levens, and Marsden.

The case was Adams against Corbett, in which the latter was charged as follows:-" For that the said Andrew Gibson Corbett, the younger, on the 8th day of January, inst., at Collingwood in the Central Bailiwick of the said colony, near the residence of this informant unlawfully and injuriously did erect and set up, and caused to be erected and set up near the dwelling houses of persons, and also near the dwelling houses of divers persons and also near divers public highways, there a certain manufactory with a boiler and other machinery therein to be used for the preparation of ammonia and other substances from gas water or other liquid, and did then on divers other days unlawfully and injuriously boil and otherwise manufacture the said gas water or other liquid, whereby divers nuisance and unwholesome smokes, fumes and smells did then and on the said other days, and times from thence there arise so that the air was greatly corrupted and infected and was of fensive and a nuisance to the inhabitants of the said neighborhood…… [The magistrates couldn’t agree, and the case was struck out.]  The Argus, 26 January 1878

Andrew Junior ‘married’ Sophia Adamson in Melbourne in 1882.  This later gave rise to some lurid headlines in many of the country newspapers.

Melbourne, Friday. — Andrew Gibson Corbett, of Chatsworth, N.S.W., petitioner in divorce yesterday for a nullity of his marriage with Sophia Ada Adamson.  The parties were married at St. Kilda in 1882, and lived together until December, 1884, when the petitioner was informed by the respondent that she was not his wife, as she had learnt that her former husband, William Adamson, to whom she was married in 1877, was still alive.  Respondent objected to the jurisdiction of the court, the objection being that the petitioner is now domiciled in New South Wales, and therefore cannot bring a suit in Victoria.  His Honor granted the prayer of the petition, subject to the question of jurisdiction being decided by a higher court.

The Argus (Melbourne, Vic. :  Tue 31 Jul 1894 - THE LAW COURTS.
A BIGAMOUS MARRIAGE. The Full Court on Friday dealt with a question of jurisdiction referred to it by the Chief Justice in a suit of Corbett .v. Adamson (lately called Corbett), for a declaration of nullity of marriage.  The petitioner was Andrew Gibson Corbett, of Chatswood, New South Wales, gentleman.

In September, 1882, he went through the ceremony of marriage at Christ Church, St. Kilda, with Sophia Seabird Ada Adamson, who represented herself as a widow, and they lived together at South Melbourne till June, 1881, when he went to Queensland on business, leaving his partner provided for.  He returned home in December of the same year, and upon arriving at his house In South Melbourne found his supposed wife in bed with another man.  A quarrel ensued, and it ended in Mrs. Adamson declaring that her former husband was still living, which was found to be a fact.  Her marriage to Adamson took place at St Patrick's Cathedral, Melbourne, in 1877. 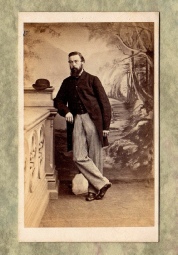 This is Andrew Gilbert Corbett, but again, Senior or Junior?

Little more is known of Andrew’s life, but it seems that he married again: 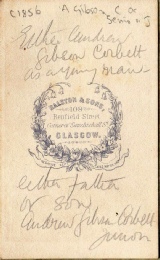