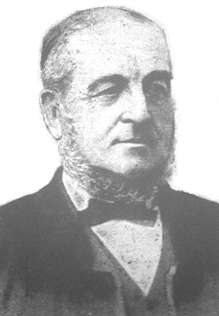 Thomas Elworthy was born in Southwark in 1825, his father being an architect and surveyor.  His principal education he received at Maryon's Grammar School, Bermondsey.  He was not quite thirteen years old when he was put into a situation, where his chief duty was the taking of warrants from merchants clearing goods out of bond at docks, and seeing that such goods were properly delivered, his employer being Wharfingers in Tooley-street.  Here he stayed about twelve months.  He liked the work ;it brought him into the timber trade, and gave him a special knowledge of foreign timber and methods of measurement, which served him to good purpose in after life.

In the evening young Elworthy, who was very fond of drawing, helped his father with his plans, while his sire, in return, gave him instruction as a surveyor, so that in a short period he felt himself fitted for a better berth.  By the introduction of his father, who did surveying and constructing for Peto, the great railway contractor, and who died in the employ of that firm at Cambridge, he got an introduction into the same business do general work.

While here young Elworthy then, as ever through life, desirous of acquiring all possible knowledge,” kept his eyes open," and in this way he obtained no inconsiderable portion of that special practical knowledge which has aided him materially in the pursuit of his calling as an architect. He served three years at a carpenter's bench, for the simple purpose of obtaining a full working acquaintance with the trade which might serve him in later days.

It was about the year 1849 that he first came to Hastings, his object in visiting this town at the time being that of a holiday-maker.  At this period he had lost both father and mother, and, so far as he knew, he had not single relative in England.  It mattered little to him where he made his home, and therefore, combining business with pleasure, he sought while here to get something to do.  As a stranger he had some difficulty in securing employment, but after a time he was taken on by Matthew Scott, who erected a part of Carlisle-parade.

Subsequently he kept the books and superintended the work of Messrs. Winter and Son, of White Bock-place, who erected a portion of Robertson - terrace.  Afterwards he was employed by Mr. Hughes, father of the present Mr. Charles Hughes, of St. Leonards.  In 1860 he opened an office in North-street, went from there into Norman-road, and thence, about a quarter of a century ago, to 101, London-road, where he has been ever since professionally located.

Of his coming to the town, and the state in which he found the borough forty-five years ago, he spoke at a meeting during the course of his municipal candidature in 1891, when he said sanitary matters at the date of his arrival here were not in such a perfect condition as they are at the present moment.  The first part he took in any public work, he proceeded to say, was prior even to the existence of a Local Board in Hastings: that is, at the time when the late Mr. Stephen Putland was Surveyor to the Commissioners.  He had assisted that gentleman in getting an additional water supply from Ecclesourne by tunnelling through the East Hill.

Mr. Elworthy had not been long in this town when that desire to do something outside the province of his own profession, and, by doing so, help others, which has ever been one of his strongly marked characteristics, manifested itself.  He joined the old St. Leonards Mechanics' Institute, the headquarters of which were at that time not far from the British Hotel…………

In connection with this Institute Mr. Elworthy had classes for arithmetic, mensuration [the part of geometry concerned with ascertaining lengths, areas, and volumes.], drawing, geometry, and so on.  He did a good deal of this work in the Temperance Hall to begin with.  Then the Rev. Andrew Reed came here, and held services in the Assembly Rooms while the Congregational Church was being built, and when the schoolroom in connection with this denomination was ready Mr. Elworthy continued his classes there.

All this was merely labour of love to the teacher, and the only cost to the pupils was that of their books.  Some of the young men who were thus instructed have gone abroad; some are in New Zealand, some in Canada, some California, and other far away spots…………..  In Technical education he has ever shown the most cordial interest ; indeed………… he preached, and caused to be practised amongst the young as much as he could, the principles of Technical education.  This system he holds to be only in its infancy just now.  He looks upon the present School of Art as merely a nucleus of what should be a first-class Secondary educational establishment.  The School Board apart, he considers it alike absurd and wasteful that Technical teaching should. be split up, so to speak, in so many pieces, instead of being, as he would most unmistakably have it, centralised.  He is one of the Committee appointed to consider the future of the School of Art………… In most matters of Technical teaching believes that we are too ambitious, and aim too high, that we should begin with more elementary subjects, and teach young people how to get over those difficulties which they meet with almost daily.  For example, he points out .that at the School of Cookery a splendid oven is used, whereas the children who receive the tuition have a very inferior range, and perhaps broken utensils in their own homes, and consequently some of them must be wholly unable to derive other than minimum of value from the lessons.

It must be said of Mr. Elworthy himself in this regard that he certainly practises what he preaches. He has given scientific lectures to Board school children and to others, and he has never shown that be felt it a loss of dignity to come down to the level of his audience, and use such language and illustrations as would be most likely to interest, and consequently to instruct, them. …………….. he makes the matter of his lectures appeal to the intelligence of both the cultured and uncultured.  It may be deemed a little singular that so matter-of-fact and practical-minded a man as Mr. FJworthy should be intensely fond of music, and even an authority upon the art of awe sounds, but, perhaps, what is still more curious is that almost every member of his large family was not only musical like himself, but possessed also considerable natural aptitude for drawing.

From his youth upward he has been a musician, his father drumming .the notes into him with his ABC.  During his lifetime he has played four or five different instruments, the last being a double bass.  Some years ago he and Mr. Arthur Butler, now organist at Warrior Square Presbyterian Church, got together a number of young fellows, and formed them into good amateur band, which met for practise his house every week for two or three years, until his son Henri, who played the first violin, died, the bereavement following on the death of another son, Josiah, just twenty months before…….. [Both buried at FB E03]  He thought all the members of the Corporation would be pleased if they paid a visit to the school in Bourne-walk and saw what wits taught the children…….

Mr. Elworthy can do nothing in a half-hearted spirit.  It was this extraordinary  enthusiasm of his, stimulating natural energy, which made him through so many years a powerful champion of Temperance in this town, the work in which connection, ardent believer he still is, and it is not too much to say must remain to the end of his career, in the principles of total abstinence, he would in all probability have continued still had he not been driven, like many another splendid labourer in the field, out of the ranks of the temperance propagandists by the extreme views and actions of certain of the leading actors.

He joined the Temperance Society at Norman Road Hall it 1862, becoming acquainted with the late Mr. Richard Beagley and with Mr. Benjamin Tree.  Throwing himself with all his powers into the cause of Temperance, he conducted a first-class Band of Hope, and also did such work for the Congregational body that was either officer, teacher, or superintendent of the Sunday School of the church for more than five-and twenty years, and was senior deacon for a considerable time.  But at length his health gave way under his labours, and by medical advice he abandoned much of the work.  In 1870 he joined the Good Templars, "A fine organisation," he says, " until they touched politics, and then they made mistake.  All the time they were moral persuasion people. Gospel Temperance preachers, they increased wonderfully."  He last held the position of district secretary for the county Sussex. He had been through most of the offices in the Lodge, and was then made district superintendent of the juveniles.  In his first year this office he managed to install twenty different societies between Chichester and Rye.