From the report in Steve Peak’s book on the Fishermen of Hastings : “Tremendous storm early last Weds (8th).  On Tuesday night there were four boats at sea.  Two returned about midnight as the gale was getting up, with large herring catches.  There was no sign of the other two until 11am on Wednesday when there was a telegram from Hythe; “Nets and barrels marked RX3 being washed ashore”.

This was William “Jimmy” Bumstead’s boat “James and Elizabeth”. Then we heard that the boat had been found bottom up at Hythe.

Meanwhile at Hythe, between 9am and 10am, the soldiers in the Dymchurch Redoubt saw a fishing boat making for the shore.  It put about half a mile off, but capsized and stayed bottom up, her occupants then were seen one by one to get up onto her, but one by one they were washed off.  They tried to make the shore but only one (the boy Consemore White, 16) made it.

He was rescued by the soldiers and taken into the fort and revived in front of the fire.  He said they had gone from Hastings to Dungeness, where they anchored, hoping to ride out the storm in the lee of Dungeness, but drifted to Dymchurch, tried to go about, but capsized.  He clung onto the seatboard with the Captain and saw the others in the water.  Captain Bumstead lost his hold and drowned.

Charles Brasier and William Lepper are not buried in the plot and the report of the funeral notes that their bodies had not yet been found. The Captain had been married 16 months and had one child. William Brasier was the son of “Tring”. The boat was owned by the skipper’s cousin, James W Bumstead.

The funeral was huge, the largest seen for 10 years – crowds lined the roads and there were several thousand people at the cemetery.

June 2021 This fish box was discovered while clearing out a netshop, a sad relic of the RX 3_

Henry John Taylor whose name was added later to the memorial, on the 7th November 1887 was injured trying to help a boat in distress.  George Gallop master and owner of “Cygnet” was trying to beach it with 3 horses, a rope and capstan.  Taylor was keeping the block clear of the stones when the chain gave way, the block struck him in the leg and the end of the chain on the neck and knocked him over.  Taylor was taken in hospital in a cart. He had a compound fracture of his right leg and a clean-cut wound at the back of his right ear.  He died 3 days later of a “fracture through the brain”. 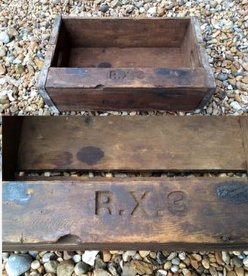