Drowned March 3 1891 “Erected by the widows of Charles Phillips and Henry Brazier”.

Charles Phillips and Henry Brazier, were lost when the “Henrietta” broke up on a groyne, having twice tried to reach the shore at the Fishmarket, they were swept west to Bopeep.

The Hastings fishing fleet suffered one of its worst-ever disasters in a severe blizzard on 9th March 1891.  There was a “Great Blizzard” and 39 boats were at sea.

Henry Adams was drowned when the “Linnet” was broken up on the pier rocks, his body was found at St Leonards and his hands were still trying to take off his oilskins.

Two boats, the Linnet and the Henrietta, were wrecked on the beach, and many others were damaged. 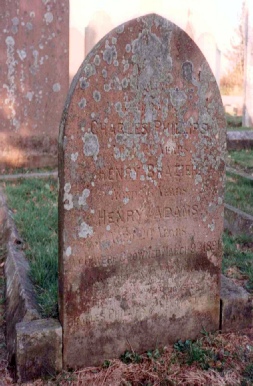 An inquest was held by Mr. C. Sheppard (Coroner for the Rape of Hastings) on the bodies of Charles Phillips and Henry Brazier, .. on Thursday morning.—……… George Phillips, a fisherman, living at Beaconsfield House, Tackleway, said he had identified the bodies as Charles Phillips, his brother, and Henry Brazier.  Phillips was 66 years of age, and Brazier 36. They were both Hastings fishermen.  Witness and the two others left in boat named the Henrietta near the Fishmarket to go trawl fishing about nine o’clock on Monday morning.  They anchored at four o'clock in the afternoon about half mile from land, the weather at that time being very rough. They could not get ashore because the tide was low. They chopped their first anchor at half-past seven, and tried to land, but could not do so on account the storm.

Hastings and St Leonards Observer - Saturday 14 March 1891
THE INQUESTS. The inquest upon the body of Henry Adams, one of the unfortunate fishermen who lost their lives during the storm, was held by the Borough Coroner (Mr. C. Davenport Jones) at the Market Hali, Hastings, last Tuesday evening.  There was small attendance of the public. The first witness called was Robert Adams, fisherman, of 3, Tamarisk Steps, who stated that the deceased was his son, was a fisherman, and resided at 115, All Saints-street. He was 20 years of age, married, and had one child.  He (the witness) saw nothing of the accident, but he knew his son bad gone on board the Linnet.

Richard Gallop, fisherman, residing at Victoria Cottage, Tackleway, said he was the master and part owner of the Linnet fishing boat.  The deceased was one of his hands.  They went out on Sunday afternoon at one o'clock, and there were three men on board, including the deceased. They were fishing on Sunday night, and came from the fishing ground on Monday, between five and six. They came straight in, and anchored at Hastings about half-past five. They were anchored outside when the storm came on at about seven o'clock. They slipped the anchor about eight o'clock and came ashore, but the wind drove the boat onto the Pier rocks. The boat was knocked all to pieces.  He and his brother, John Gallop, managed to get on shore.  He saw the deceased when he got out of the boat for three or four minutes, not swimming, but on the rocks, and up to his waist in the water.  He did not see him struck by anything, and thought all the time that he was saved.  He did not see him sink.  He (the deceased) was about 20 yards from the people on the rocks. That was the last he saw of him. It was about half an hour from the time the boat struck until they (the survivors) got ashore. The people on the rocks were for the most part fishermon. He could not say when deceased sank……………

Witness:They bad not got a line where the (the witness) was.  There was no wreckage near the deceased which could have struck him, and he did not see the deceased after he was washed off the rock, neither did he hear witness Gallop call out to throw a line.  He heard a sound, but could not tell from what direction, as the sea was very rough at the time.  Twenty yards was the nearest he was any time to the deceased.  Everything was done as far as he could see to save the deceased, and he, with others, helped the two Gallops ashore. He did not think a line would have been any use, as the wind was too strong. Charles Mitchell, fisherman, 10, John-street, said that he found the body at about half-past six that (Tuesday) morning, about 60 yards from South Colonnade, St. Leonards. It was in the water among the rocks. ……… the Coroner briefly summed up. He said he thought they would have no difficulty in returning a proper verdict, as he did not think, in view of the evidence they had heard, that any of the Jury could have the slightest doubt that deceased came to his death from accidental drowning.  He was seen by both the witnesses Gallop and Spice on the rocks, and though there did not appear to have been much done towards endeavouring to save his life he (the Coroner) did not under the circumstances think that anything more could have been done…….. 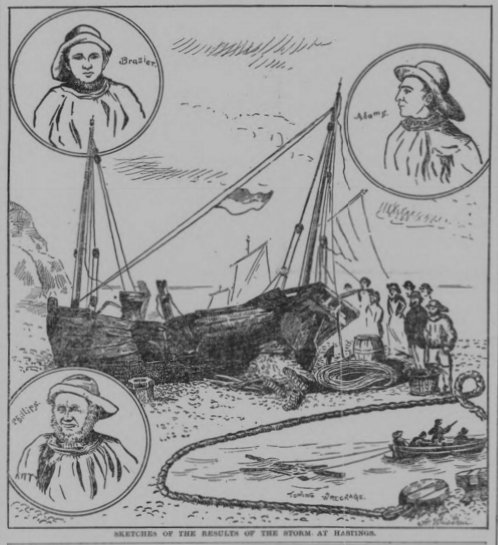