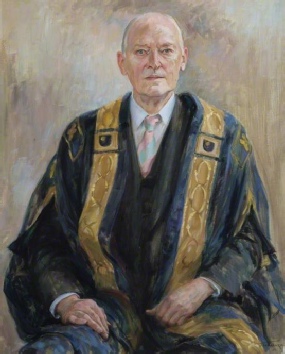 By kind permission of the artist.

Gerald Austin Gardiner (EM …)was the son of Robert Septimus Gardiner and served as Lord Chancellor of Great Britain from 1964 to 1970, in the Prime Ministership of Harold Wilson.  Born in London in 1900, Gardiner served in the Coldstream Guards during the Great War, and afterwards went to Magdalen College Oxford, where his advanced views on female equality nearly ended his academic career.

His simultaneous interest in dramatics was in part derived from his kinship with the Irish playwright Dion Boucicault. At one point he had wanted to make the stage his career, and acted in a West End production with Gerald Du Maurier.

In 1925 he was called to the Bar, where his conscientious work and forensic skill led to appointment as King’s Counsel in 1948.  In the Second World War he worked with the Friends Ambulance Unit, a Quaker volunteer organisation.

After the War Gardiner became involved in law reform in many of its manifestations, such as the Legal Aid and Advice Act of 1949, and the campaign against capital punishment.

Among his notable cases was his representation of the Daily Mirror when Liberace sued for libel in 1959.  (Improbably the Mirror lost.)

When Penguin Books were prosecuted under the Obscene Publications Act for the British edition of D H Lawrence’s Lady Chatterley’s Lover, Gardiner defended the publisher.   His securing of an acquittal for Penguin became for many the cultural beginning of the 1960s.

In 1964 he defended Leon Uris, author of Exodus, against an Auschwitz doctor who had sued for libel.  Technically Dr Dering won his case — and was contemptuously awarded damages:  a ha’penny, the smallest sum possible.