This gravestone is in two parts and appears to have some missing.

Also Edward Hennah only son of the above named

We know from the records that this is also the grave of Anne Hennah – died December 1879, aged 71 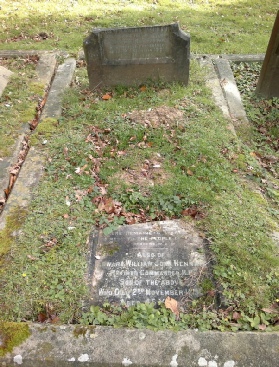 William Hennah (1768 - 1832) was from St Austell.  He entered the navy in 1793 and in 1805 was the First Lieutenant of HMS Mars of 74 guns, commanded by Captain George Duff.  Duff was killed during the Battle of Trafalgar and William Hennah took over command for the rest of the battle.  For his services he received the Thanks of Parliament, a Gold Medal and a Sword from the Patriotic Fund.  The ship's company gave him the unusual honour of a Letter of Commendation.