“By dint of his own personal efforts and attention to business Mr Jenkins rose to the position of the largest employer of labour in the borough.  He was not born with the proverbial silver spoon and was the architect of his own position.  He came to Hastings about 30 years ago and began business in a small way.  During the latter part of this period Mr Jenkins has carried out many of the chief local contracts and has executed several big jobs for the Corporation, one of the first of which was the erection of the Marine Sea Wall from St Leonards Church to Bopeep, followed, some years later, by a continuance to Grosvenor Gardens.  He also erected the new Sanatorium and has also built much in connection with the waterworks.

Recently he completed the noble pile of the Theatre of Varieties in Marine Parade and at the time of his death had in hand the erection of the New Coastguard Station [in Sturdee Place], also reservoirs at Fairlight (for the Corporation) and the New Workhouse.

The late Mr Jenkins was widely respected as a good master. He was altogether a generous-hearted man.  In politics he was an ardent Liberal, and although he was seldom seen at public meetings, he had great influence at the time of a contest.” 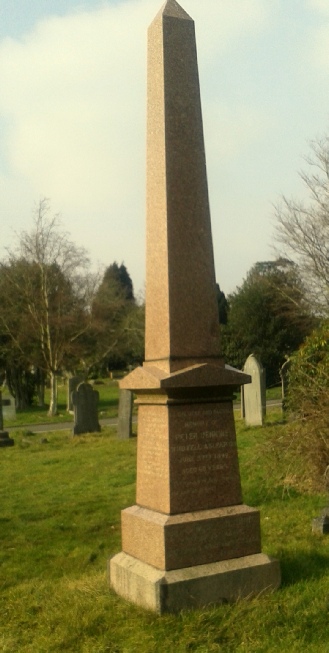 To the dear and blessed

Who fell asleep on

"The finger of God touched him and he slept"

Youngest daughter of the late

"Until the day breaks, and the shadows flee away"

And eldest daughter of

Who died at Ottawa Bank

"Fear not, for I have redeemed thee.  I have called thee by name.Thou art mine.  Isaiah