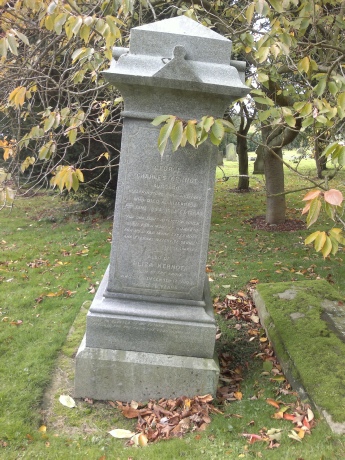 For our light affliction which is but for a moment
worketh for us a far more exceeding and eternal weight of Glory.

widow of the above

Come ye blessed of my Father
inherit the kingdom prepared for you
from the foundations of the world.

Hastings and St Leonards Observer - Saturday 23 June 1888
The late Dr. Kernot - In our obituary last week, we announced the death Dr. Kernot at Inverness, where he had gone for change and the benefit his health.  Dr. Kernot was a well known man in Hastings, having lived in Elphinstone-road for the last fourteen years.

At the beginning of that period had practised a little, but as he had been engaged in his profession as a physician and a surgeon since 1847 in Poplar, and as his object in coming to Hastings was to obtain rest, he soon retired altogether from business.

For a long time he had suffered from heart disease, but it was to apoplexy that he eventually succumbed.  He was enjoying a better state of mind and body than had been the case for long time past while in Inverness, whither he had gone with his son-in-law, and his death was, therefore, a great shock to his relatives.  It occurred on night the 13th inst., when he was in bed.  He was taken suddenly ill about half past twelve, and called to his son-in-law, who was sleeping in the same room.  The latter quickly went to him, but only to catch a few sighs before the old man died.

Dr. Kernot''s age was sixty-three.  He was, as we have said, well known in Hastings, and was interested in several of our local business Companies.  He belonged to the Mendicity Society, and to several other charitable institutions, both in Hastings and in London.  His character was kindly, and he was liked by all who knew him.  Though a member the Liberal Club, he took little or no part in politics.

He leaves a widow and daughter.  The body was brought to Hastings and on Tuesday he was buried in the Borough Cemetery. Messrs. Phillips, Bros, undertook the funeral arrangements here.

OBSTETRICAL TRANSACTIONS. VOL. XXXII. LONDON.  FOR THE YEAR 1890.
George Charles Kernot, Ph.D.Giessen, L.D.S., E.C.S.,L.S.A., died in June, 1888, at the age of sixty-four, but his death also was not notified until the present year.  He practised in Elphinstone Road, Hastings, and was elected a Fellow of the Society in 1865.  He was the author of works, "On Asthma, Influenza, and Bronchitis," published in 1852, and "The Question of Vaccination, its Advantages and Present Dangers," published in 1870.

Hastings and St Leonards Observer, 23 Jun 1900
IN MEMORIAM. - NOTEWORTHY CITIZEN. GEORGE CHARLES KERNOT. (June 19th, 1888.) Mr. George Charles Kernot was a very well known resident of Hastings, having come from London, where he had an extensive practice as a surgeon.  When he left the busy Metropolis for the quieter seaside town he retired from professional life, and became deeply interested in commercial affairs.  He was connected with several local companies to the time of his death, which occurred when h» had entered upon his 64th year- He had a large circle of admiring friends and was popular with all he came. into contact.

Eliza was still living at 9 Elphinstone Road when she died in 1903.  They had one daughter, Agnes Laura, married name  Kirk.