Also
Sophie, wife of
Henry Swaine
and Widow of the above,
John McClelland,
Who died April 5, 1885
Aged 44 years 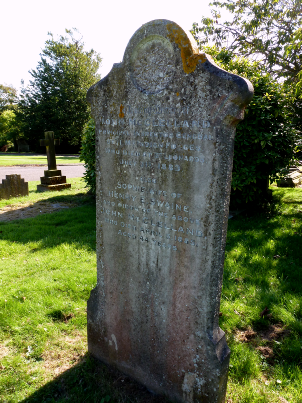 See note below.  Inscription on grave clearly reads McClelland, though this could be an error by the mason. Sophie’s name also is variously given elsewhere as Sophy and Sophia.

Mr. John McClelland, M.D., F.L.S., F.G.S, who died on the 31st ult., at 29, Marina, was formerly principal Inspector- General of H M. Indian forces.  The deceased gentleman was a Fellow of the Royal Botanical Society of Ratisbon, a corresponding member of the Royal Academy at Turin, of the Society of Arts, London, and of the Boston Society of Natural History.

[Note: This involved a lot of research amongst records variously giving the name Sir John McClelland (Wikipedia) John McLelland, John McClelland, and his name as given by him on his publications, John M’Clelland.  All later records record it as John McClelland, but whether he changed this himself on his coming to England is uncertain, as I haven’t seen any original census records.  Another problem was Sir Joseph Hooker’s assertion “John McClelland, “a persevering Scotchman,  without  much  ability,  or  power  of  perception”.  Other records, correctly, show him as born in Ireland.  Birth and death dates also vary!  Initially it was thought two people had been conflated, as it seemed unlikely one man could have achieved so much.

This idea was put to rest when coming across the following:

“Dr. M'Clelland forgets that he holds, or did then hold, three offices,  Namely Deputy Apothecary; Assistant Opium Examiner and Secretary to the Coal and Iron Committee - all salaried appointments; - a short time before this discussion he was Curator to the Museum also, to which he had no objection to be re-appointed [sic].  The first of appointments above requires actual attendance at office from eleven to four daily. ….”  Books on Google Play - Journal of the Asiatic Society of Bengal, Volume 8, Asiatic Society, 1840

Spelling inconsistencies have not been adjusted, to indicate the one of the problems]

In 1835 he was sent on a mission (Tea Committee) to identify if tea could be grown in north-eastern India along with Nathaniel Wallich and William Griffith.  [According to Sir Joseph Hooker “three most disagreeable people in India.”]

A six-member committee was set up in 1835 for investigating the coal and mineral resources of India with Dr John McClelland (1805–1875[sic]) of the Bengal medical service as its secretary.  Its report submitted in 1838 largely dealt with coal.

A controversy erupted in mid-1839 when M’Clelland was offered the post of curator of The Museum of the Asiatic Society Of Bengal on a permanent basis, subject to the particular requirement that the curator spend two hours daily on the museum and that he furnish monthly reports on the state of the collections. M’Clelland objected.

The Calcutta Journal of Natural History, and Miscellany of the Arts and Sciences in India, edited by John McClelland, appeared in 1841, and ran up to 1847 at least.

In 1852 McClelland was appointed Superintendent of the Forests in the newly-acquired province of Lower Burma, an appointment he held until 1856.

McClelland is commemorated in the name of the mountain bulbul, Ixos mcclellandii.

In his work as an ichthyologist he described many species and several genera of fish, among them Schistura.

A species of venomous snake, Sinomicrurus macclellandi, is named in his honor