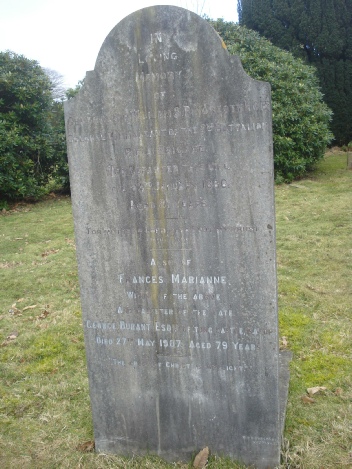 Widow of the Above

And Daughter of the late

‘The cross of Christ is my light.’

William Sherbrooke Ramsey Norcott was born on 12 December 1804 in Chelmsford Essex, the second son of General Sir Amos Godsell Robert Norcott CB KCH who had commanded a battalion of the 95th Rifles at the Battle of Waterloo and Elizabeth Noble.

William married Frances Marianne Durant on 4 July 1848 in Hove.  She was born on 8th October 1827 in Brussels; her parents were George Stanton Eld Durant & Lucinda Saunders

“Major William Norcott's aim in keeping a journal during the Crimean War, to amuse his wife and to confide to her his fears and loneliness, reveals something of their relationship and of his experience of those years away from home.” [Taken from The Rifle Brigade 1800 to c.1870: A Study of Social, Cultural and Religious Attitudes by Crosby, Anne Stevens; there are many examples of Sir William’s virtues in this work.]

The diaries themselves are held at Hampshire Archives and Local Studies, Winchester, and in their blog you will find in an article by a volunteer, also showing Sir William’s artwork.

“Sir William Norcott’s Crimean War diaries. I don’t think you can get much closer to these past moments than by, in this case, holding the small volume and going with him as it did, through the cold and cholera and other privations of the Crimea.”