MAN FOUND IN MILITARY UNIFORM. The Borough Coroner (Mr. W. J. Glenister) held an inquest at East Beach Street last evening (Friday), on the body of an unknown man, which was recovered from the sea the previous morning.

Leading Boatman Gilbert White said he saw the body floating eastward about a hundred yards from the shore. On the body, which was much decomposed, was a serge tunic with Imperial brass buttons, and a pair of trousers. The disc produced bore the No. 9,202, and the initials S.A.N.L.R., which witness thought meant South African Native Labour Regiment or Reserve. The trousers had a thin red stripe down the seam, and he thought the uniform was military.

John Hart, a fisherman, of Tackleway, said, accompanied by White and Muggeridge, he put off and recovered the body, which was floating off the end of the Harbour.

Police-Sergeant J. W. Brownie assisted in removing the body to the Mortuary. The body measured 5 1-8th inches.  There were ten teeth in each jaw.  He found the disc tied round deceased's neck with a piece of string.  There was a stripe on each arm, denoting the rank of Lance-Corporal.  In a brown leather purse was a small amount of money and a Kruger coin.

Dr. A. T. Field said he had examined the body, which was very much decomposed, and had evidently been in the water about six months.  The skin remaining was white, and his opinion was the body was that of a white man.  It was impossible to give the cause of death. Deceased was over thirty, he should think.

A verdict of "Found Dead in the Sea" was returned, but no evidence to show the cause of death. 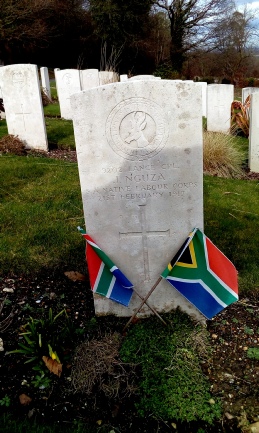