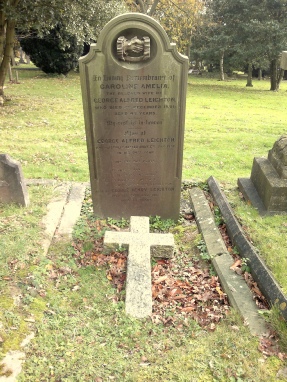 In loving remembrance of

the beloved wife of

who peacefully passed away 17th July 1906

My ambition I did gain,

In ever loving memory of our dear

'Until we meet again.'

George Alfred Leighton was born in London in about 1838, he was a clothier or tailor.  He married Caroline Amelia Crocker.  When the 1861 census was held, George and Caroline had only recently married and were living in Gay Street in Bristol.  George was employed as a clothier's cutter.

Their first child, Helen M. Leighton ("Ellen"), was born at Bristol in 1861.  After this, they moved to Abergavenny, where their second child, George Henry Leighton, was born on January 5, 1863 at their home in Castle Street. When Caroline registered the birth she described her husband as a tailor.

The Leightons then moved again, this time to Swansea, where they stayed for at least four years. Their second son, Thomas Alfred Leighton, was born on December 9, 1866 at their home at 224 High Street, Swansea. Caroline, who once again registered the birth, stated that her husband was a "clothier".  She had two more children at Swansea: Charles James Leighton in 1868 and Caroline Amelia Leighton ("Amelia") in 1870.  The 1871 census gives the family's address as Victoria Place in Elliot Street.

The 1881 census records that George Leighton had moved from Wales with his family and was running the Railway Inn in St Leonards.  Thomas Alfred and Charles James Leighton were attending a boarding school in Church Road, Hastings. George Henry Leighton had left school and become a tailor in Hastings, but was still living with his parents.

In the 1891 census George Alfred Leighton is registered at 29 Western Road, St Leonards, (it appears to refer to the Railway Hotel, which is on three roads) an Innkeeper, and his wife is Jenny A (either a mistake on the part of the recorder, or a pet name as the elder children match those of his marriage to Caroline)  At this date George and Jane (born in Swansea) had two more children, Eliza, aged 4, and Georgina aged 2.

Hastings and St Leonards Observer - Saturday 21 July 1906
DEATH OF MR. G. A. LEIGHTON.—The death is announced of Mr. George Alfred Leighton, who passed away on Tuesday, aged 69.  Mr. Leighton, who had suffered from cancer for some time, had held the licence of the Railway Hotel for 30 years, but owing to his ill-health he resided recently at Swansea Villa, Upper Park-road. was a Freemason, and became a member of the Royal Oak Lodge, No. 871, on February 1st, 1876.

Deceased leaves a widow, four daughters, and three sons to mourn his loss. The funeral, the arrangements of which were carried out by Mr. Spencer, of the Old Town, took place cn Friday at the Borough Cemetery.