Stephen Putland and his wife, Mary and their grandson, William Steven Putland, who died in Hastings, November 1920 aged 60, were buried here but no sign of this grave, or those of other Putlands buried in BN, survive.

On the day she died, she said to one of her children, "Suppose the Lord should say to me, 'I have need of thee.'"

Stephen died aged 73, on 26th January 1880.   He was the Borough Surveyor, and in 1873 he became a Justice of the Peace and Chief Magistrate. In1864 he was Mayor of Hastings. He was a founder of Norman Road Methodist Church and was one of the original eight trustees of Silverhill Chapel (later to be St Luke's United Reformed Church).

Born in Beckley in 1805, while Stephen Putland was still an infant his parents moved to Northiam.

In April 1826 he married his cousin Miss Mary Putland and in 1828 they came to St Leonards from Horsham when he was engaged as Surveyor to the Turnpike Trust.

They first lived in Lavatoria - a square which he was instrumental in 'opening up' to the rest of Norman Road and St Leonards by enlarging the opening in Burton's boundary wall in 1841.

He worked as a councillor, a lay-preacher in the Wesleyan ministry, surveyor and coal merchant.   By 1851, he was resident at 4 London Road with his wife, Mary and children.

The 1861 Census shows his address as being 7 London Road

Hastings and St Leonards Observer - Saturday 31 January 1880
DEATH OF MR. PUTLAND. It is with deep regret that we have to record the death of our old and respected townsman, Mr. Stephen Putland, senr.  The deceased gentleman's health has been failing for some time past, and it was in consequence of this that he had to retire from his position as an Alderman for the Borough. He died on Wednesday last.

Mr. Putland was in the true sense of the word a public man, ……. For upwards of half & century he has worked hard for the good of his fellow-townsmen.  He was at one time a local preacher, being an earnest and ardent Wesleyan Methodist. ….. He carried on business as a surveyor and road contractor for several years, but added to this pursuit that of a coal merchant.  In the latter avocation he was engaged, together with his sons, up till the time of his death, being very successful, in all his transactions.

….. He, on more than one occasion, was chosen as Deputy-Mayor, …… In most all the local improvements which have been carried out, Mr. Putland took a most active part.

Hastings & St. Leonards Times - Saturday 31 January 1880
IN the death of Mr. STEPHEN PUTLAND we lose another of the links which bound the Hastings of the present with the Hastings of the past.  Mr. PUTLAND'S career runs contemporaneously with the foundation and extension of the modem portions of the borough, from George Street in the east to Bopeep in the west.  ………. If his talents were neither great nor brilliant, he made good use of that moderate ability which is often of greater service than genius itself.

Mr. Putnam had been, previous to his death on Thursday last, a sufferer for many years; and those who knew him best believe that it was his devotion to his church work that shortened his life.  He has gone to his rest amid the sorrow of a large and devoted family, esteemed by a wide circle of friends, full of years, and full of honours.

Hastings and St Leonards Observer - Saturday 07 February 1880
On Monday afternoon last the remains of the late Mr. Stephen Putland, of London-road, St. Leonards, were interned in the Borough Cemetery. Most of the shops in London-road were partially closed the mournful procession passed in taken of the respect and esteem with which the deceased had been held.

““an outline of one who raised himself from low estate to a position of honour, show also his connection with the town from its earliest history.” Brett Eulogy - https://historymap.info/Stephen_Putland_(1806-1880)#google_vignette 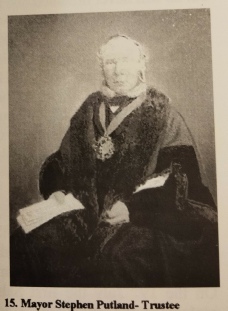