The first death in the family occurred prior to the opening of the borough Cemetery.

Jane was Henry’s second wife. His first wife was Sarah Ann (died November 1878) who was buried with their daughter Henrietta Rosina, who had died in May 1876 in BN K04

Hastings and St Leonards Observer - Saturday 11 April 1891
Death of Mr. H. R Putland.— lt is with deep regret that we have to announce the death of Mr. H. R. Putland. the second son of the late Alderman S. Putland, J.P.. which sad event took place on Monday, at his residence, 11, Magdalen-terrace, Bohemia-road, St. Leonards.  The deceased was for some years a member of the Board of Guardians, and took a prominent part in politics, on the Liberal side.  He was formerly an ironmonger at St. Leonards, but had to retire through failing sight, and for some time past he had been in ill health. He died somewhat suddenly, the immediate cause of death being heart disease.  He was also suffering from bronchitis.  Mr. Putland was twice married, and leaves a widow and one son. 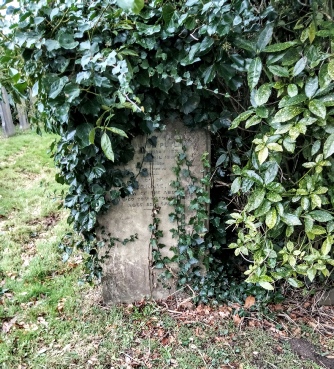 That Christ know all

Widow of the above

Burial records give her name as Jane