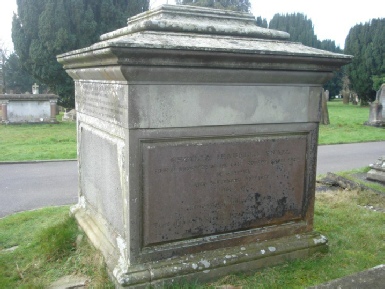 The son of Revd Daniel Robertson (Professor of Oriental Languages at St Marys College, St Andrews University, 1809-1817) Patrickwas born at Meigle, Perthshire.  His mother died when he was four and he and his two younger siblings were primarily raised by a maternal aunt, who is buried here - Small, Ann Lindsey - aged 85, died in December 1862.

Patrick was educated at St Andrews University. After graduating, Robertson joined other

members of his extended family in the East India and China trade, becoming a wealthy man.

In London his address was 7 Pall Mall, in Hastings he lived at Halton House.  [The house stood where Hardwicke Road is today.]

He was Sub-Governor of the London Assurance Corporation and had various banking interests.  He never married.

A wealthy London Merchant, Patrick Francis Robertson, leased the ground from the Crown for a period of ninety nine years at an annual rent of £500. Mr. Robertson who later twice became a member of Parliament for Hastings had great visions for the development of the town as a seaside resort, as, in addition to the America Ground, he visualized erecting buildings all along the sea-front to the west as far as Warrior Square, and attempted to form a partnership with Charles Eversfield and Decimus Burton - unfortunately to no avail.

January 1850 saw Patrick Robertson embark alone on the development of the first part of the America Ground, which, as Crown Property, was governed to a large extent by the need for official approval, and being a shrewd business man, he ensured he had official approval by employing the Crown architects - Messrs. Reeks & Humbert of 7 Whitehall Yard, London, to draw up the plans. Reeks and Humbert later opened an office at 15 Pelham Crescent, and their name appears exclusively on all building and planning applications, maps, etc. for Robertson Street up to December 1856.

The next few years (1856-1864) saw many applications mostly bearing the name of H.Carpenter, Architect, 36 Robertson Street, after which several local and national Architects became involved with various alterations and additions to premises in the street.
http://www.rootschat.com/history/hastings/content/view/3/