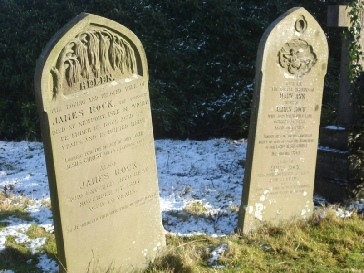 The mortal remains of

Simply resting on the unmerited
mercy of God through the atonement
of our Lord Jesus Christ.

'Her end was peace'

'Thou shalt guide me with thy counsel’

The Loving and beloved wife of

Died at Newport, Isle of Wight

Years, and is buried here

Who entered into rest

'So He bringeth them unto their desired haven
And afterward receive me to glory.'

James Rock was the fifth child of William and Lydia Rock, born in Chelsfield  Kent, 1791; was apprenticed in 1803 as a blacksmith (his father’s trade) to Gowar’s coachbuilders in East London, where he married Catherine Hawkins in 1817; James jnr.was born in 1818, the only one of their three children to survive to adulthood.  Catherine died in 1821.

The family moved to Hastings in 1822, and in 1823 he married a widow, Mary Anne Bury.  James set up his business, recorded in 1828 as ‘a coach manufactory consisting of a large front shop, workshop behind and a forge, with working loft over the whole’, in the America Ground area, as a tenant of Thomas Breeds, at £52 p.a.  James Rock therefore became one of those given a seven year lease, expiring in 1835, when the whole America Ground area was ordered to be cleared.  By 1831, with his business flourishing, Rock became a freeman of Hastings, with 275 others, in a mass increase of the voting population.