of the late Thomas  Ross

Only son of the above

Also Hannah Ross, wife of the above

‘Peace, perfect peace with loved ones far away’

‘In the Presence of God is Fullness of Joy’ 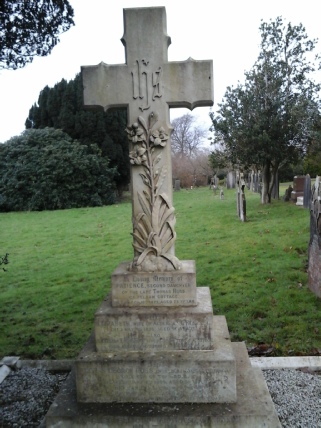 Thomas died in 1847, before the opening of the Borough Cemetery.  He was the father of Patience and Thomas.  Master Gunner Ross, came to Hastings about 1800 to take up command of the Coastguard Station at what was then known as "Government House".  He later built Pelham Cottage.

Patience named on the memorial, is the daughter of the above, and sister to Alderman Thomas.  She was born on 3 July 1799, in Stoke Damerel, Plymouth, the second of six children.

Thomas, the fifth of the six children born to Gunner T Ross and Patience, was born on the 2nd March 1810, in Hastings. Three years before his death he was featured in Hastings and St Leonards Observer on 7th December 1878.