Fanny Mary Shaw was the wife of Frank Herbert Shaw.  Born Fanny Mary Edwards, the daughter of a Church of England vicar, she married Frank Herbert Shaw in her father’s church in Minety, Wiltshire on 26th September 1883.  At the time Frank Shaw was living in Chester, although his father, also a doctor, lived in St Leonards.

Frank Shaw’s family had originally come from Middlesex, but were already living in Hastings in 1871 at 33 Marina.  His father was a homeopathic physician.

By Frank and Fanny were living at 33 Warrior Square (possibly the same address?) and Frank was a medical student, as was his older brother Charles.  The family were obviously quite comfortably off as by 1881 the household included a lady’s maid, cook, housemaid and footman. He trained at Kings College and Guy’s Hospital in London and also studied in Germany, and became a surgeon.

The Frank Herbert Shaws had four sons and a daughter.  Margaret was 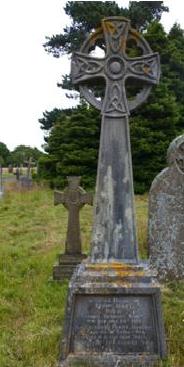 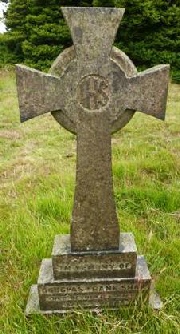 Douglas Frank Shaw died on October 6th 1891 at the age of 5 and is buried at EE M07, just behind his parent’s grave.

Hastings and St Leonards Observer - Saturday 05 July 1902
DEATH OF MRS. FRANK SHAW :o: FORMER LIBERAL WORKER.
The deepest sympathy will be extended to Mr. Frank Shaw in the death of his wile, which occurred somewhat suddenly, at The Gables, Pevensey-road, St. .Leonards, last Sunday.  Of late years neither Mr. nor Mrs. Shaw took a part in public affairs, but some back the late Mrs. Shaw was one of the leading members of the Hastings Women's Liberal Association.  Several charitable works claimed her close attention and ever ready assistance, notably, the Bychanan Hospital and the National Society for the Prevention of Cruelty to Children. Mrs. Frank Shaw also took great interest in the boarding-out ot children by the Hastings Union. being one of the visitors, and, we believe, acting Secretary to the Boarding-Out Committee.  Her connection with theWomen's: Liberal Association dated back to its early days, aud it was only within the last 12 months that she resigned office as one of the Vice-Presidents. and was succeeded by the Hon. Mrs. Freeman-Thomas.

Her work for the Association was very variable, though of late years, owing to failing health, she had not been able to take the same active participation in its afairs as formerly.   At one time Mr. Frank Shaw stood for the Hastings School Board, and was elected, but increasing pressure of business compelled him to relinquish his seat.  A year or two ago his wife went to Switzerland for her health, and returned greatly benefited.  The news of her death came a severe shock to her many friends in St. Leonards and Hastings.  Mrs. Frank Shaw was the daughter oi a clergyman, now deceased.  She and her husband came to Hastings about 1885, living at Wellington-square, afterwards in Warrior-square, and subsequently at The Gables, Pevensey-road.

On Wednesday evening the Vespers for the Dead were held at Christ Church, St. Leonards, the coffin being placed in front the chancel, covered with beautiful white wreaths and lighted with tapers.  A Calvary Cross extended the length the coffin.

THE FUNERAL SERVICE took place at Christ Church, St. Leonards, Thursday morning, at ten o'clock. The Rector (the Rev. Bernard Moultrie) officiated, the Rev. F. J. Watson reading the Lesson.  The hyms were Just as I am, ' the Resurrection Morning, ' and Peace Perfect Peace.''  Mr. W. Goss Custard presided at the organ, and played " O, Rest in the Lord."  As the coffin was borne from the church the Choir sang the Nunc Dimittis-  A large number of ladies in mourning were present in the church, and among the congregation was the Rev. E. Clowes. The interment took place at the Borough Cemetery.  Mrs. W. Slade, sen. (president the Hastings Women's Liberal association), Mrs. W. Hansom (secretary), and Miss Love (treasurer), attended as a deputation from the Association; the Association sent a handsome wreath....