In Loving Memory of My Devoted Husband,
William John Stone,
Who Passed Away July 28th, 1926
Aged 73
At Rest My Beloved

Also Sarah
Wife of the Above
Who Entered into Rest
Nov. 21st 1929.  Aged 72
Daughter of the  Late
James Brampton
of Northamptonshire 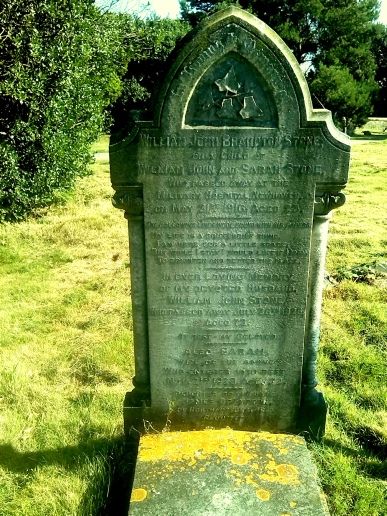 In the 1891 census William is living as a widower, aged 38, at 1 St Thomas's Road, employed as a foreman tailor.  In the same year he married Sarah Brampton at St George’s, Hanover Sqaure, London and the couple settled in Hastings.

Sarah was the oldest of four children, all born in London.  Her father died in London in 1874 when Sarah was still only 16 years old.

[The opening sentences are illegible, but would appear to relte to his tailoring business.] ……street and later in Queen's-road.  Of him it is told that when he moved to Queen's-road he was one of the first to open business premises there, and was warned that he was “going out of the world."  So little was the development of that part of the town foreseen by most people.  Mr.Stone was engaged in the same business, but his lifework was with the Friendly Societies.

In 1878, at the age of 21, he first joined the A.0.F., and was soon appointed juvenile secretary.  Not long after he became assistant secretary of Court Cinque Ports, and 17 years later full secretary in succession to Mr. F. C. Fermor.  In 1807 Hastings seceded from the Brighton District and formed a district of its own, Mr. Stone becoming District Secretary, which post he held until his death. For this departure, which has proved a very wise move, wee largely responsible. A methodical man, Mr. Stone prided himself always on keeping his accounts in apple-pie order, and the feet that during his membership of the society the invested funds of the Cinque Ports Court have increased from .£2,218 to about and the membership from 835 to 900, is largely attributed to his watchful care of the finances.  During the 88 years of his secretaryship over £85,009 was laid out in  benefits.

For many years he was also secretary of the Shepherds office which he had intended to relinquish later in the year. In all he was office-bearer for 58 years. his retirement from the Court Cinque Forts secretaryship in 1925, was succeeded by Mr. B. Tabbs, on whose accidental death he willingly -came back and helped fill the gap.

So  wide was his circle of friends that has often received letters from the Colonies thanking him for kindnesses rendered by him in the course of his duties.  Mr. Stone is mourned by his widow, but leaves no children, his only son having died while serving in the Army during the war.  The funeral will take place at the Borough Cemetery to-day at 8 p.m.

THE LATE MRS. S. STONE
.~The death occurred on November 21st. of Mrs. Sarah Stone at her residence, 96, Poppleton Road, Leytonstone, at the age of  72.  She was tiie widow of the late Mr. William John Stone, who was secretary of the local Court of the Ancient Order of Foresters Friendly Society, and daughter of the late Mr. James Brampton, Northamptonshire.