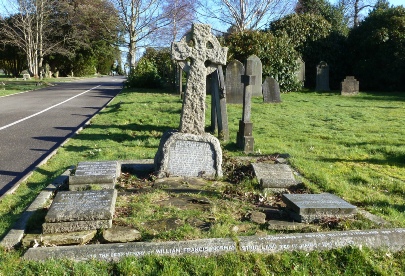 His father Francis was a corn merchant.  Herbert seems to have had no part in the family business.  Educated at Mill Hill School in London from 1899, he went on to qualify as a solicitor with practices in Hastings and Eastbourne.

In 1916 he served with the Mediterranean Expeditionary Force (MEF) based on Mudros, and was then sent to France where he was assigned to the Nelson Battalion but in May 1917 he was sent home with inflammation of the connective tissue (ICT) in his left foot.

After a period of hospitalisation he was declared unfit for active service.  In April 1918 however he was deemed fit enough to be sent back to France to join the Hawke Battalion and returned to France on 20th April 1918.

Herbert was killed in action 3rd September 1918. He was hit by a machine-gun bullet in front of the village of Inchy while leading his company of the Hawke Battalion in the attack on the Hindenburg Line.’ (Mill Hill School Role of Honour) 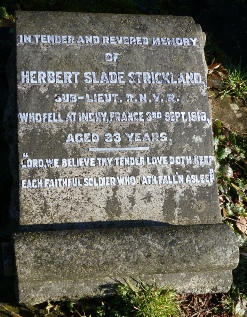 In Tender and Revered Memory

He is remembered on the family grave (see Postscript) along with his parents Francis and Jane Strickland, and is commemorated on the Vis-en-Artois Memorial.