Francis was a corn merchant and worked with his brothers in a firm founded by his grandfather George.  George was born in Appledore Kent on 5th December 1780 but by 1820 had moved to Hastings and set up a corn and seed merchants business, having originally sold fruit and vegetables and general foodstuffs. The firm expanded throughout the 19th century and was run in turn by George’s son Edmund (1806-1897) and then his grandsons. The business had, at various times, premises in Hailsham, Heathfield, Littlehampton, Chichester, Newhaven and Lewes.

The Hastings branch was eventually run as a separate business by Edmund’s youngest son Francis (1849-1929) becoming F Strickland & Sons Ltd.  (Many documents relating to family and the firms’ history are available at the East Sussex Records Office - http://www.thekeep.info)

Jane was born Jane Elizabeth Slade in Leeds in 1851.  She and Francis were married in Hastings on the 3rd July 1878.  She was the daughter of William & Mary Ann Slade.

In 1898 Jane was elected to the Hastings School Board.

1902: she was one of the first members of the Hastings Education Committee.

Jane, like many in Hastings, was a suffragette and was attacked in her car in the 1914 riot.

She was on central executive of National Union of Women’s Suffrage Societies; joint signatory of letter to Asquith in 1916 on behalf of Church League for Women’s Suffrage

1929: she was appointed a magistrate.

She was vice-chairman of Hastings Labour Party and local chairman of the Women's Freedom League, campaigning for women's suffrage.  More on Jane

Also remembered on the grave, (as well as some illegible names - (see Postscript) are two sons:

In Affectionate Memory of
Francis Strickland, J.P.
Died 4th april 1929 Aged 79.
For 39 years a deacon and for many years Treasurer of the Robertson St.
Congregational Church, Hastings.

Jane Elizabeth Strickland, J.P.
Died 9th Sept/ 1932 aged 81
The welfare of children was  her chief concern and from 1886, until her death she took an active part in the work of the Education Authority of the Borough.
"Oh love that wilt not me go
I rest my weary soul in Thee." 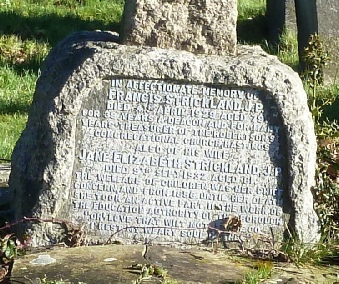 Back to Herbert Slade Strickland