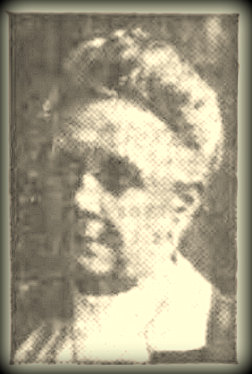 Unless otherwise stated the items below are from Hastings and St. Leonards Observer. Saturday. September 17. 1932

A LIFE OF SERVICE. One of the greatest educational and social workers that Hastings has ever known. Mrs. Jane E. Strickland. J.P., 7, Regency Mansions, Verulam-place, Hastings, died at the residence of her daughter-in-law at Weston-Super-Mare in the early hours of yesterday (Friday) morning, at the age of 83.  She had been in failing health for some time and left Hastings for a holiday only a fortnight ago.  Her husband, Mr. Francis Strickland. who died a few years ago, and was well known in the town, was an agricultural merchant, and the business is now carried on by two sons, Mr. Norman Strickland and Mr. Arthur Strickland. There is also another son, and a daughter, who is married and lives in America.

A woman of fine character, Mrs. Strickland was admired and respected by all who knew her.  She was appointed magistrate in 1929 and sat regularly on the Hastings Bench.  Education was her life study and she was elected to the Hastings School Board and in 1901 she became one of the first members of the Hastings Education Committee.  She was on the board of management of several schools.  The girls of the Hastings Central School, where she was also a manager, regarded her as one of their greatest friends and named one their houses after her.  The schools for domestic training also received her close attention and interest.  As vice-chairman the Children's Care Committee she was present at the opening the Prince of Wales of a new wing at the Chailey Heritage Craft School in July.  She was a member of the Mental Deficiency Committee and was one of the chief movers for the foundation of the St. Leonards School for Delicate Children at Hollington.

Mrs. Strickland took a great interest in politics and was vice-chairman of the Hastings Labour Party.  As a believer in votes for women she did much for the suffragette movement before the war.  Her work in this direction was mainly carried on through the Women's Freedom League, of which she was the local chairman.  Among her other interests, she was a member of the Tuberculosis Care Committee, Workers' Educational Association and the Literary Society.  When a branch of the National Society for the Prevention of Cruelty to Children was formed in Hastings, Mrs. Strickland did much of the work in conjunction with her father, the late Mr. W. Slade, and the late Mr. O. Barrett.

The funeral will at Robertson-street Congregational Church, which Mrs. Strickland had attended for many years, on Tuesday at p.m., and the interment will be the Borough Cemetery at 1.45.

"They were a great generation," said Mr. Lloyd Davies.  “There are many estimates of the Victorian era and its men and women, and I can say that the men and women leading in this church when I came twenty years ago were representatives of that era, men like Norcutt, Jepson, Campbell and Woodley, Francis Strickland and Jane Strickland.  And when I think of those names I very violently disagree with the estimates which the younger generation form of that great time when these people lived and did their best work.”  "There was something very magnificent in that generation, and those who had the privilege of knowing them would the first to agree with me that the town of Hastings was never better served than it was by those men and women.  They were men and women of most wonderfully sterling character and achievement. I can say from pretty intimate knowledge that among the finest of them was Jane Strickland.  I knew her well, in the Church and outside it. 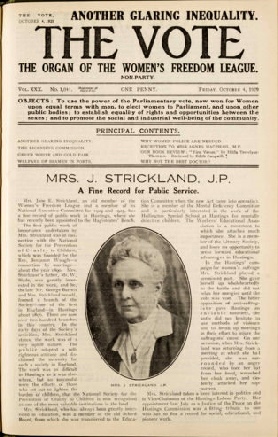 One of the great personalities of this town is how the Rev. J. Lloyd, former minister of Robertson-street Congregational Church, described the late Mrs. Jane Elisabeth Strickland. J.P. in an eloquent tribute at the funeral service held Tuesday at the church with which she had been closely connected for many years.  Mrs. Strickland’s death last Friday, at the age of 81 years, removed one of Hastings most devoted educational and social workers, and a large of friends and fellow-workers in the activities in which she was interested attended the memorial service.

Among them was Mrs. Prelooker (president of the local Women's Freedom League), and other members, including Mrs. Montefiore, Miss Prelooker. Mrs. Clift ……

THE VICTORIAN ERA. The service was conducted by the Minister (the Rev. E. J. Hawkins),

Rev. J. Lloyd Davies,  who read the lesson…… recalled that he came to Hastings twenty years ago that week as minister at Robertson-street, and remembered especially two people of the generation who received him then, the generation Mrs. Strickland represented.