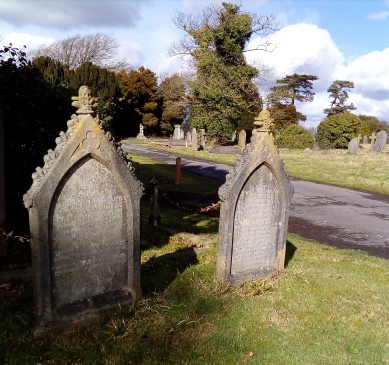 the beloved wife of the

Looking unto Jesus, the author

For more than 33 years

In The Castle, Hastings.

Now then we are ambassadors
For Christ.  As though God did
Beseech you by us.  We pray
You in Christ's stead be ye
Reconciled to God.

For he hath made him to be sin for us, who knew no sin; that we might be made the righteousness of God in him. 11 Corinthians, V.20

He being dead yet speaketh. Hebrews, XI,4

the Rev. Thomas Vores, who, for more than thirty years, preached with all love and earnestness the gospel of Christ, and whose simple and faithful lifting up of the Saviour brought consolation to many troubled and anxious soul. 2 Corinthians v. 20, 21, upon his tomb tells truly the story his ministry.

[Elisabeth’s name is spelt Elizabeth in some sources”, the gravestone says “Elisabeth]

Hastings and St Leonards Observer - Saturday 08 April 1871
The remains of Mrs. Vores were interred in the Cemetery on Monday afternoon, amid indications of the high respect to the deceased lady, and her sorrowing widower.  Among the mourners were the Revs. C. D. Charlton, W. Batley, H. Geldart, and a considerable number of the local clergy.  The funeral Service was performed by the Right Rev. Bishop Harding

For many years a confirmed invalid, there is a thought which Elisabeth repeated more than hundred times during her last illness. She had long been a true believer, but one distressed exceedingly by doubts and fears. But these words had marvellously helped her :

Regard not feelings good or bad
Trust only what He saith.
Looking away from all to Him—
This is to live Faith.

Rev. Vores and his wife had one son, Thomas Stiverd Plomley Vores (later a Hastings J.P.)

Hastings and St Leonards Observer - Saturday 02 October 1875
The Funeral of the Rev. Thomas Vores
On Tuesday last the remains fo the Rev. Thomas Vores, whose death we recorded last week, were interred at the borough Cemetery.  There were general signs of mourning in the town during the day, most of the shops in the principal thoroughfares having shutters up, whilst the flags on the flag-staffs on the parades were hoisted at half-mast.

The funeral procession consisted of a hearse and five mourning carriages and behind came a long line of private carriages.  When the procession started there were nearly thrity carriages following, but by the time the Cemetery was reached, this number had aurgmented to nearly 60..........

The inner coffin consisted of elm, and the outer one of polished oak, with solid brass fittings.  On the lid was a plate with the inscription -

The report of the funeral is followed by a long article "Funeral Sermons" St Mary's-in-the-Castle, devoted to Rev. Vores.

Hastings and St Leonards Observer - Saturday 09 October 1875
The Death of the Rev. Thomas Vores - Funeral Sermons
Funeral sermons were preached at most of the churches in the borough on Sunday, on the death of the Rev. Thomas Vores, and no further evidence of the popularity of the deceased minister could be needed, than the universal expression of regre which his death has called forth.

Mr. Vores was educated the Grammar school, Northampton, and entered the University of Oxford as a commoner of Wadham College.  He subsequently became scholar, Fellow, and tutor of his college.  In the Michaelmas term 1825, his name appears in the first class honours for classics, and the second ftor mathematics.

In 1832 he was ordained deacon, and priest in 1833.  Two years later, viz., 1835, he married and left Oxford.  He succeeded the Rev. H. Vaughan, as minister of Park Chapel, Chelsea, and became one the secretaries of the Church Missionary Society.  He was appointed to the incumbency of St. Mary's-in-the-Castle by the Earl of Chichester 1841, and here for more than 35 years he laboured earnestly, zealously, with success in the cause of Christ.  For years he bore the reputation of being the most popular preacher in the town, his preaching was characterized by affectionate earnestness, simplicity, and a faithful adherence to the Evangelical teaching of the Church of England.