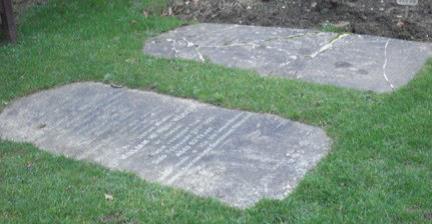 "Blessed are they
who have/not seen

And yet have believed"

The memorials to the Whistler family inside the

George Washington Whistler, an assistant professor of mathematics at West Point, a surveyor and engineer, constructed the 1st mile of passenger railroad track in the U.S. for the Baltimore and Ohio Railroad, invented the locomotive steam whistle (which was not named after him), surveyed part of the U.S.-Canada border and went to Russia at the request of Czar Nicholas I to build the Moscow-St. Petersburg railroad at an eventual cost of $40 million.  In 1828, the B. & O. sent McNeill, Whistler and a civilian locomotive builder, Ross Winans to England to study the latest developments in railroad construction.  Upon his return to America, William was promoted to First Lieutenant.

George Whistler married his second wife, Anna McNeill, on 3 November 1831. She was the sister of George's partner, William McNeill, and the daughter of Scottish-born Dr Daniel McNeill and Martha (Kingsley) McNeill of Wilmington, North Carolina. Anna (McNeill) Whistler has been described as "a plain-featured, austere, humourless religious fanatic." They had five sons, of whom only two survived to adulthood, James and William. 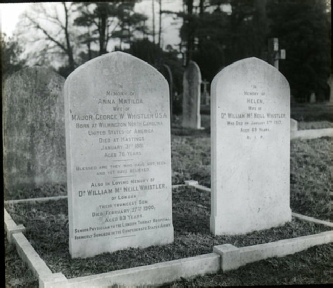 Anna and William’s gravestones in their original position.  See friendsofhastingscemetery.org.uk/77order.html