They were married on the 28th March 1850 - At 369 St Vincent Street, on the 28th instant, by the Rev. John Paterson of Anderston Church, Andrew Gibson Corbett Esq., merchant, to Mary Anne, daughter of the late John Stewart Esq., Hyde Park.

The Corbett family were in Victoria by 1866.  It is possible that he followed in the footsteps of a former partner of Thomas Corbett & Co., James Service.

Brighton, April 30 - The Argus, Melbourne Friday 4th May 1866
Andrew Gibson Corbett, formerly in Glasgow, now in Australia, ceased on  the 30th day of April, 1865, to have any interest in  the business of Corbett  and  Company, Tea  Merchants, in Glasgow, of which he was previously sole partner ; and since then the business has been, and  is still carried out by the subscriber, Charles Simson, under the  same firm, for his own sole behoof.  Thomas  Corbett, Attorney for Andrew Gibson Corbett. Charles Simson. WM. BROWN, Clerk, 29,  St. Vincent-place, Glasgow, Witness. DAVID  MARTIN.,  Clerk,  2 J,  St. Vincent- place, Glasgow, Witness.

Andrew (Senior) invested in land in Victoria and in Queensland.  He also engaged in various industries.- and quite of lot of litigation. (More information available via a search at http://trove.nla.gov.au/)

GLASGOW COOKING DEPOT - TO THE EDITOR OF THE ARGUS
Sir,- My attention has been directed to a paragraph in your paper of Friday last, in which the Glasgow cooking dépôts are highly spoken of; but your correspondent adds:
'Notwithstanding the cheapness of the fare, the gentleman who has made the speculation is making a fortune by it"
As my brother is the Gentleman alluded to, allow me to state, that the entire profits from the commencement have been devoted to charitable and philanthropic objects.  For instance, £600 was lately presented to the Glasgow Working Men's Exhibltion.  I received the enclosed statement by last mail, and send it, thinking it might be interesting to your readers.
I am, Sir, your obedient servant.
A. G. CORBETT. / Brighton, April 30. 1866

The Age (Melbourne, Vic. ) Sat 2 Aug 1873
Corbett  v. the South Costerfield Gold and Antimony Company. — An action to recover £317 for goods sold and delivered
The plaintiff' is Andrew Gibson Corbett, merchant.  In the earlier part of 1872 the defendant company was started, and upon the representation of certain of the directors machinery was supplied valued at the amount sued for, and which it had been arranged to pay one-half by cash, and the balance by a bill at six months.

The money was not paid, nor was the bill met, as agreed upon. Tho defendants pleaded non-indebtedness.  A verdict was returned for plaintiff, damages £317 12s. 3d.

The Argus (Melbourne, Vic.)  Thu 14 Sep 1882
NOTICE is hereby given, that the PARTNERSHIP heretofore subsisting between the undersigned, Andrew Gibson Corbett, sen., and Andrew Gibson  Corbett, jun , carrying on business as machinery merchants at Melbourne and Ballarat, has been this day DISSOLVED by mutual consent.  The business will henceforth be carried on by the said Andrew Gibson Corbett, sen , only, under the style of " A. G. Corbett  And Co." and he will receive and pay all debts due to and by the late firm.
Dated this lst day of September, 1882.
A. G. CORBETT. / A. G. CORBETT, Jun. / Witness-J. W. Symonds.

And on behalf of his daughter -

ROMAN CATHOLIC INTOLERANCE. TO THE EDITOR OF THE ARGUS.
The Argus  Monday 8 January 1877 p 7
Sir,-In to-day's issue I observe a letter .. in which my daughter although not named, is
evidently the lady referred to. She is at present on a visit to Warrnambool ……. [See p.3]

More litigation continued as his wife, Mary Anne, tried to gain title to land left to her in his will. [See page 3.} 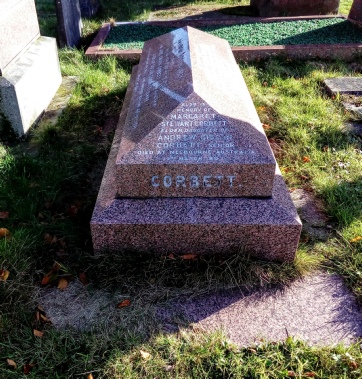