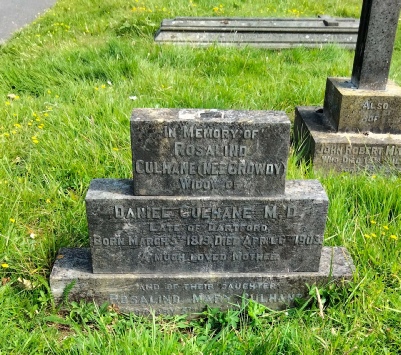 A Much Loved Mother

And of their Daughter

Daniel Culhane was born in Limerick, Irland.  He became a surgeon and apothecary.

Daniel and Marthe had 2 children, Anthony Patrick Culhane and James de'B B Culhane.  Marthe died in 1843.

In the 1891 census Rosalind, and her daughter Rosalind Mary, are living with Frederick, at 123 Mt. Pleasant Road.

We regret to record the death Mrs. Culhane, mother F. W. S. Culhane, which occurred on Monday at her residence, Highworth, Milward-road.  The deceased lady, who had reached the advanced age of 84 formerly resided in St. Helen'e-road, and was one of the earliest of the Rev. Canon parishioners.  She was the widow of Mr.Daniel Culhanr M.D. of Darttford. and daughter of the late Mr. William Crowdy, of Highworth. Wilts…

The following report from the Observer caused quite a lot of research, our conclusion being confirmed by a correction a week later.

'BURIAL OF MRS. CULHANE— The funeral of the late Mrs. Rosalind Culhane, who was an aunt of the late Dr. Culhane, who was for many years a medical practitioner in Hastings, took place on Tuesday last at the Borough Cemetery.  The cortege came by motor from Ramsgate, where the deceased lady had been residing for a number of years, and was followed by immediate relatives . The coffin, which was covered with beautiful wreaths was interred in the family grave. The arrangements were very ably carried out by Messrs. Bryant and Sons, undertakers. Oueen's-road, Hastings, in conjunction with Messrs. Blackburn and Son, of Ramsgate.

THE LATE MISS ROSALIND CULHANE.—We regret that the late Miss Rosalind Mary Culhane whose death was reported, in last week's "Observer” was referred to as the late Mrs. Culhane.  Miss Culhane was a sister of the late Dr. F. Culhane, formerly well known in Hastings.  She made many friends in the town, which she left in 1903, moving to Bexhill. In 1920 she went to live at Ramsgate, where she died on June 16th.