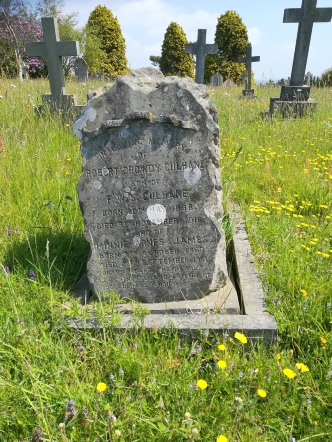 For 59 years the searly loved nurse of

On November 9th the School was

shocked by the news of Culhane's sudden

…....  And if ever a young life of eighteen summers can be deemed a complete and perfect

whole, that of Robert Culhane, to those who have known and admired his career at School, and who have been privileged to have some glimpse of his relation to his family, is such a life.

"form" he displayed in all his work, and in the racquet-court and on the cricket field, his brief life was marked by a "finish" and a distinction special and almost unique. It is true that this

cannot alter our sense of loss, and our deep regret that he was not spared to render the great services and to win the great distinction that would surety have been his.

He came to Parkside in September, 1911, as a Foundation Scholar, having been previously at Rev. H. C. L. Tindall's School at Hurst Court, Ore.  From the very first he quietly and decisively took his own line—a line of unflinching honesty, rectitude of purpose, with the fullest activity and interest in every department of school life. ……

As head mathematician of the School, he gained the "Parcel Gilt Pen" and a Judd Leaving Exhibition for mathematics last Skinners' Day.  He was a member of the Cricket XL this year,

being a safe field and a sound bat, and also of the Racquet Pair, Racquets was, indeed, probably his favourite game.  He had also played for the School XV., while at Fives in 1915 he was a member of the winning House pair.  In the O.T.C. he was a very efficient Cadet

Officer and had always been an enthusiast in military matters. This December his aim was to have been an open scholarship at Cambridge, and then the Royal Plying Corps and the service

His high ideals and his determination to do his duty to the School and to the House regardless of popularity or the reverse were the most prominent traits in his character.  His influence more

particularly, in the House, was very great and many will testify to the kindly interest he took in them and the fine example he showed them.

he funeral took place at the Borough Cemetery on Tuesday of Miss Minnie Agnes James, the dearly loved friend and Nannie to the family of the late Dr. F W. S. Culhane, [medical officer of the Workhouse] the original owner of Glin House, Hastings, where he was in practice for 30 years. The Rev. K. J. Rowland conducted the service and among those present were Mr. and Mrs. Frank James, Miss Margerie James, Mrs. Ward, Mrs. Booth, Major Loader, Major Peacock and Dr. Culhane’s only surviving son. Mr. Michael F. and Mrs. Culhane.....................

Miss James' connection with the Culhane family had been a long one.  She entered the household of Dr. and Mrs. Culhane soon after their marriage in 1891. She watched with them the building of Glin House, where their six children were born, to whom she devoted the rest of her life.

The younger generation also loved *Aggie (writes a correspondent), and a few months ago she was strong enough proudly to hold in her arms Dr. Culhane’s great-grand-chlld, who achieved his first birthday two days before "Aggie" died.